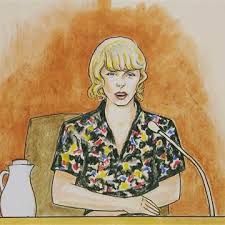 The cross examination of Taylor Swift is a textbook example of good witness preparation and questionable questioning.

Ms. Swift consistently used the word “ass” not butt, or tush or rear end. There’s nothing cute about assault.  She used a vulgar term never associated with a cute toddler – a word that makes people squirm.
And it was not a playful pat, as with sports teammates, “He had a handful of my ass. I know it was him.” Ms. Swift carefully attacked the bad conduct, not the person, “I thought what he did was despicable.”  She did not say Mueller was despicable.

Sometimes, excellent attorneys, such as the fictional Perry Mason, do not question witnesses if there are no facts we want from the witness.  It is risky to argue one’s case through witnesses.  Mueller’s lawyer Gabe McFarland tried to argue through questions, which opened the door for a slap back from Ms. Swift.
For example, Attorney McFarland pointed out the front of Ms. Swift’s skirt in the photo was not lifted up.  Why?  “Because my ass is located in the back of my body,” Swift answered.  No doubt, her attorneys asked her that question before trial began.  McFarland would have been better off just pointing out the hemline to jurors in closing argument.

Attorney McFarland opened himself to another counterpunch when he noted that Swift was closer to the alleged perpetrator’s girlfriend than the perp.  Said Swift, “Yes, she did not have her hand on my ass.”
Attorney McFarland tried to point his finger at others.   He asked Swift if she were critical of her own bodyguard for not protecting her.  Again, Swift was well prepared.  I’m critical of your client sticking his hand under my skirt and grabbing my ass.”  Another chance to repeat her allegation that he grabbed her ass.

Best of all for Ms. Swift was the opportunity to jiu jitsu the blame for firing question. Attorney McFarland tried to blame Swift, the victim, for the consequences to the perpetrator of reporting bad conduct.  Swift flipped over the attorney and the alleged perp., “I am not going to allow your client to make me feel like it is any way my fault, because it isn’t . . . I am being blamed for the unfortunate events of his life that are a product of his decisions and not mine.” that answer shows expert coaching.   She accused the “client” Mueller of attacking her instead of Mueller’s attorney.  She kept the focus on Mueller and the simple allegation that he grabbed her ass.

I qualify the above by saying that I did not read the entire transcript. I’ve only seen reports of the cross examination. However, it sure sounds like Swift schooled Attorney McFarland, who, perhaps, should have quit asking questions sooner than he did.